In boiler two kinds of drafts are predominant – forced draft and induced draft. Each requires set of fans that can perform its function. Draft fans are classified as centrifugal and axial type based on the direction of the air flow in the boiler. Different industries use different type of fans depending upon their industrial needs. 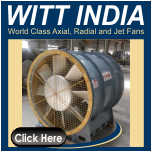 In this type of fans air flow is along the radial direction of the fan. Centrifugal fans use a rotating impeller to move air initially, radially outwards and then tangentially away from the tip of the blades. They can generate high pressures. They are used in dirt removal of the air streams, in material handling applications and systems operating at high temperatures.

Working of the Centrifugal Fans 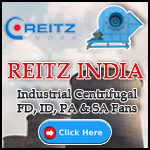 In axial fans the air flow direction is parallel to the impeller shaft. The parts of the axial fan are propeller and vanes. Axial fans usually have a series of vanes coupled on the propeller shaft.

There are some other kinds of fan designs too that can be used in draft of the system. Some are given as centrifugal inline fans, centrifugal roof exhaust fans, utility fans etc.

Iconic One Theme | Powered by Wordpress